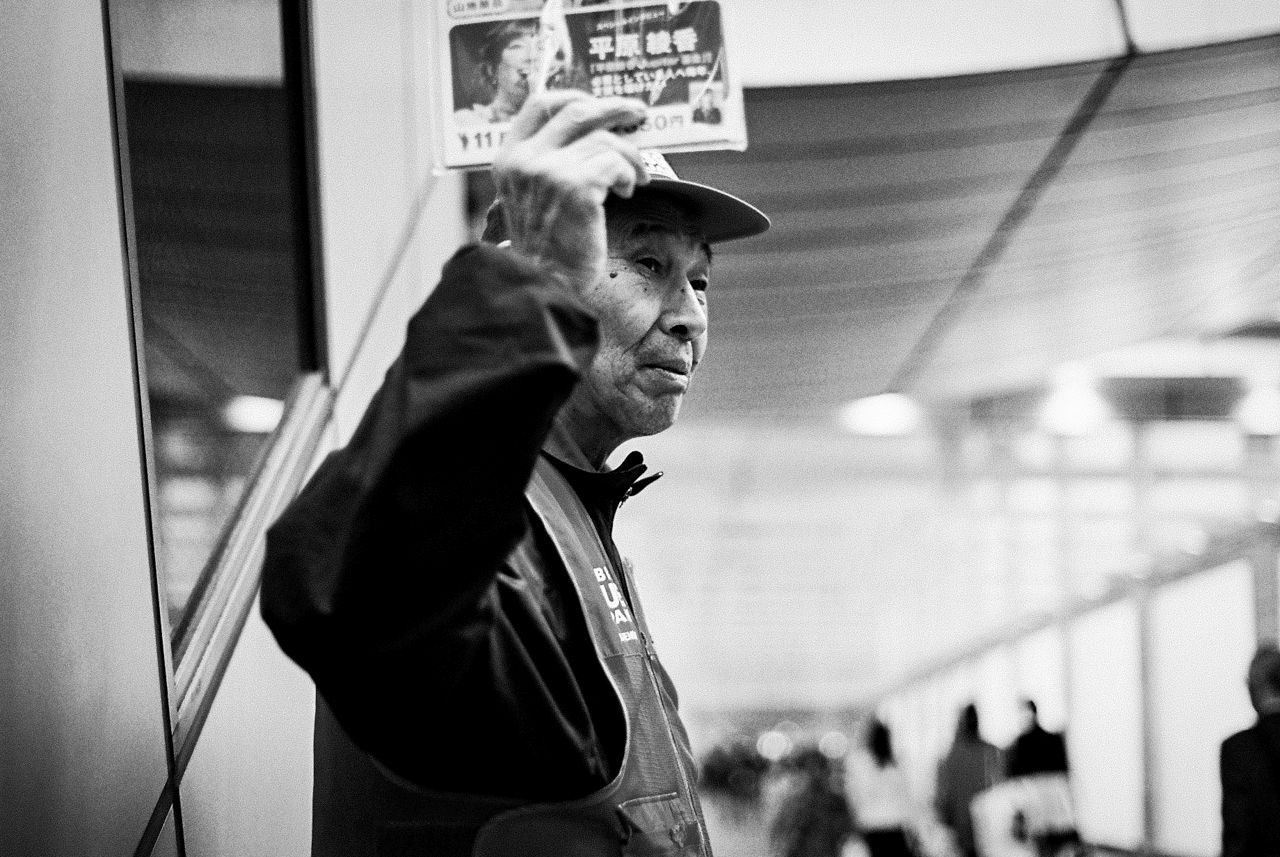 Adam Isfendiyar and the experience of sleeping on the street with the homeless in Tokyo.

Adam, please tell me a bit about yourself and your photography.

I am 37 and from London, England and have a lot of varied interests which is why I am attracted to documentary making. You can interpret alot about yourself through your photos. I think that there is a certain amount of darkness and edge that comes from my emotional make up.

I try to see the good and beauty in everything but when editing I usually pick the photos that also have a tinge something which says things will never be perfect. I think that is part because of my personal history and perhaps an element of being English too and never being able to see unadulterated beauty without some cynicism. I am more concerned about the feeling of a photo than the technical attributes e.g. sharpness, though that can also be a story telling tool, but the technical aspect is something that doesn’t excite me as much as the emotive possibilities.

Your original from England but for many years in Tokyo now. How did that come about?

I moved to Tokyo in 2010 as I wanted to study Japanese acupuncture, i studied with a teacher for about 4 years and when that came to an end I needed a break from what I was doing and felt that the artist in me had been seriously neglected. I am currently planning on leaving Japan, though it seems to be happening as a gradual process as I am working on photography projects and ways to make traveling and photography sustainable.

Talking about street photography, what are your favorite places and themes in Tokyo for that genre and why?

I don`t really have a favourite place to take photos in Tokyo. I guess a lot of my photos tend to be in trains or train stations, perhaps that`s in part because it`s a place that I am likely to stand around in for a long period of time and also because there is a big mix of people moving around and therefore more opportunities to take interesting photos.

As far as themes for some reason I seem to be drawn to grumpy old men, who usually refuse to have their photo taken…they tend to have the most interesting faces and seem to be the least conformist in appearance, but can be the most uncompliant when it comes to taking photos.

You submitted a photo series from a personal essay about Matsuyoshi san, a homeless man in Tokyo. How did you find him and what was your motivation to document his live?

I met Matsuyoshi san a couple of years ago as he sells The Big Issue magazine on my route to work. He speaks really good English and we would often have a brief chat in passing. Since coming to Japan I have been fascinated by the homeless situation, as it is made up of mostly middle aged or elderly men, the majority of whom seem quite content and just want to live in peace and not be hassled.

I really wanted to find out about some of their personal stories and as I made a few documentaries whilst at university I have had an interest in making one on homelessness in Tokyo for a while but wasn’t able to recruit anyone who could help me with the language barrier and was willing to go and chat to homeless people with me.

One day I bumped into Matsuyoshi san when I was on a lunch break and we had a chat and he told me a bit about his life and situation, I felt that i would like to help him and it was around the time that I was thinking of projects I could do, so I came up with the idea of doing a photo documentary and contributing a portion of sales of any prints that I sell of Tokyo scenery to him and he agreed. 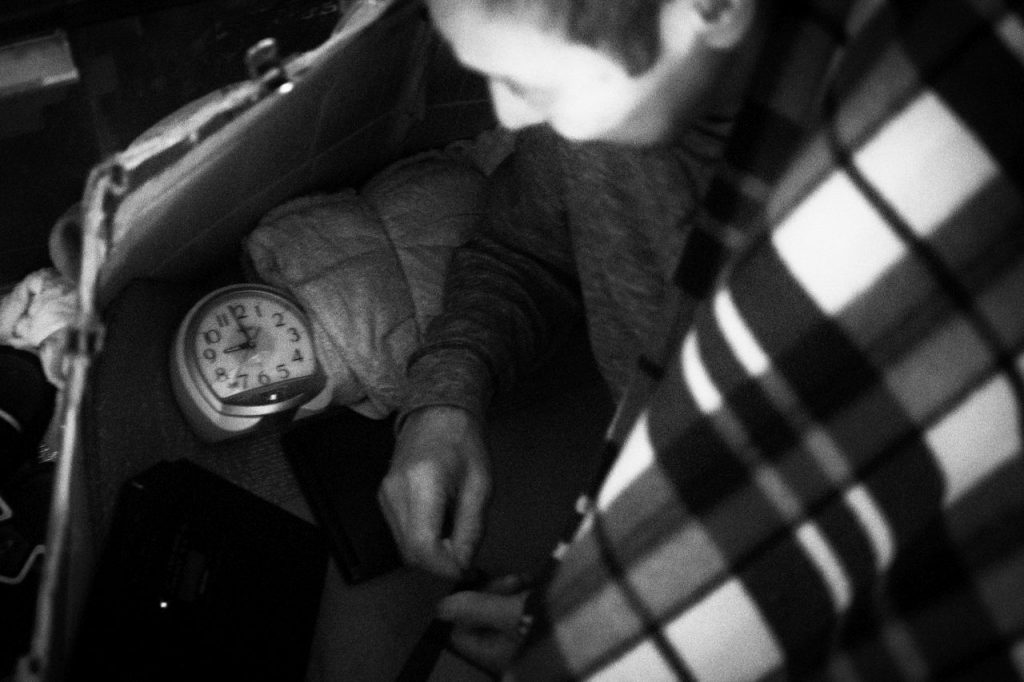 Matsuyoshi san and clock before going to sleep 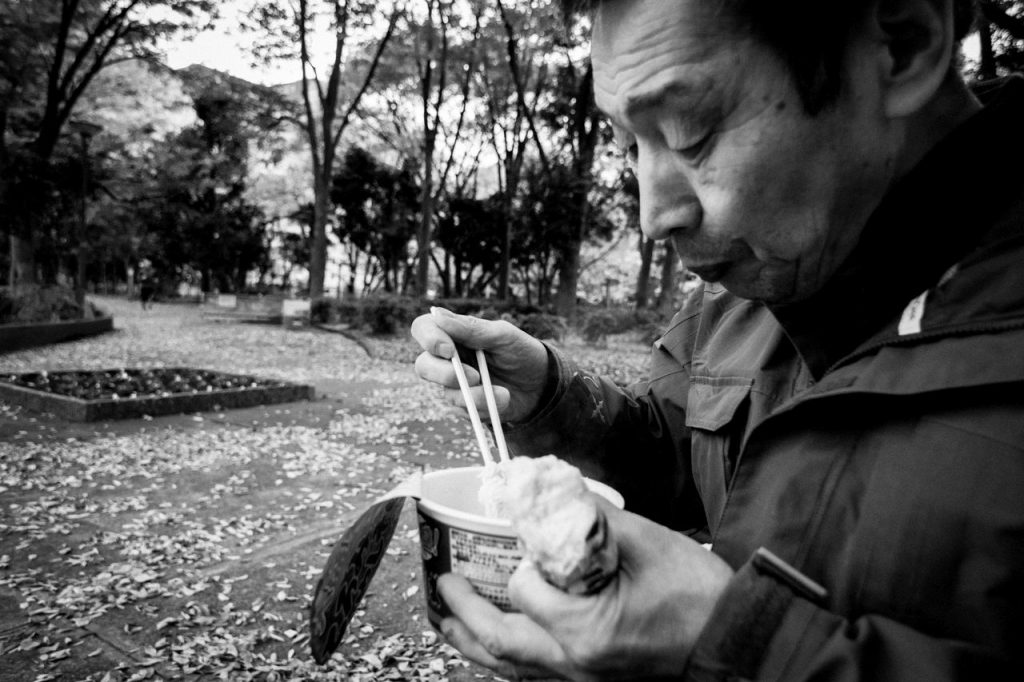 Some of the contents of Matsuyoshi san’s storage area

Sleeping on the streets, despite the fact that Tokyo is incredibly safe, sounds like a huge overcoming. What were your biggest concerns or challenges whilst being out on the streets?

Tokyo is an incredibly safe city, so I had very few if any concerns about safety. My main concern was whether I would be able to actually sleep or not! As if I was tired I was worried that I wouldn’t have the energy of focus to concentrate on the task at hand. I chose to do the project in November as the weather conditions would be a bit harsher and so I would get a more authentic experience of sleeping on the streets, otherwise it wouldn’t be much different to camping!

So the cold was a bit of a concern, but it turned out not to be a problem as the box is actually quite warm and I had enough layers to protect me. I think it would be a totally different experience if I were to do this in most other countries. The normal concerns that you might have of sleeping rough in most countries don’t really apply in Japan. 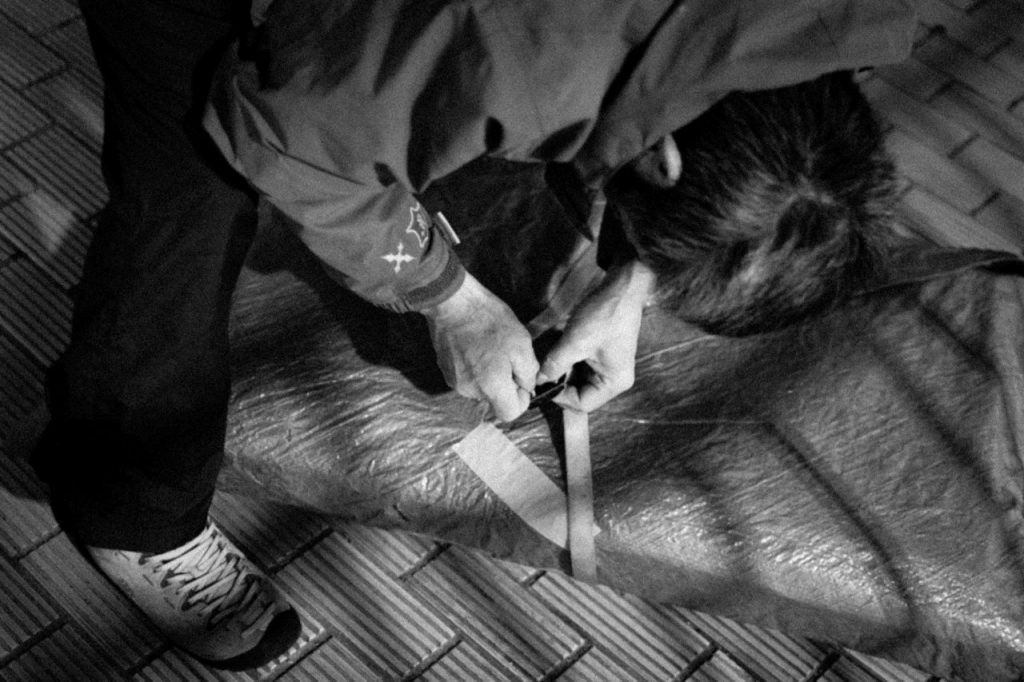 Matsuyoshi san packing up his box in the morning 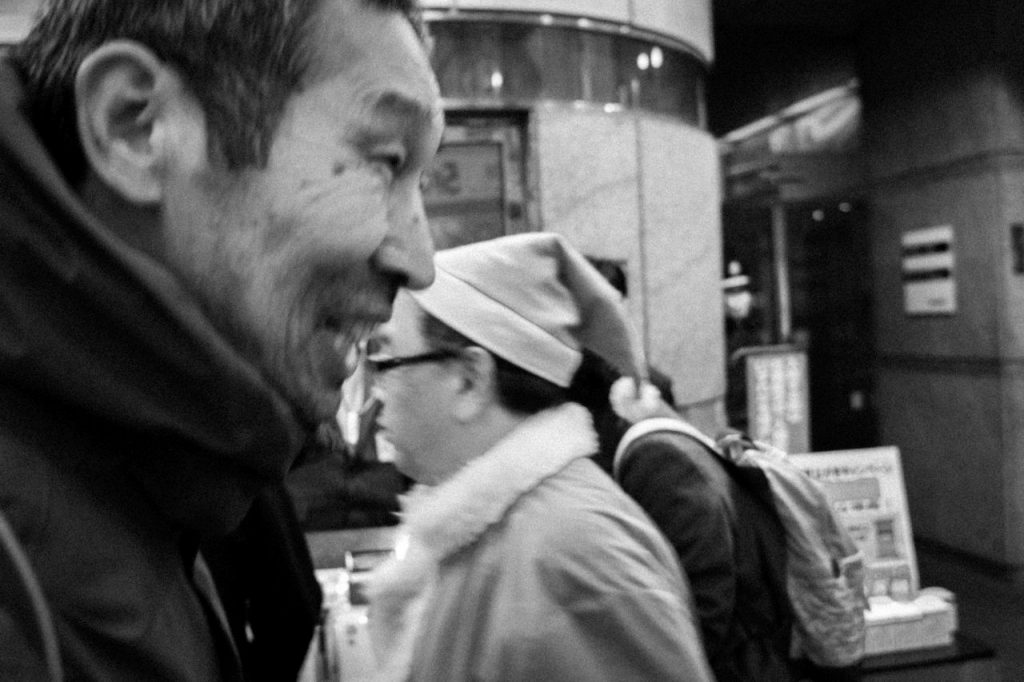 Walking and talking with Matsuyoshi san 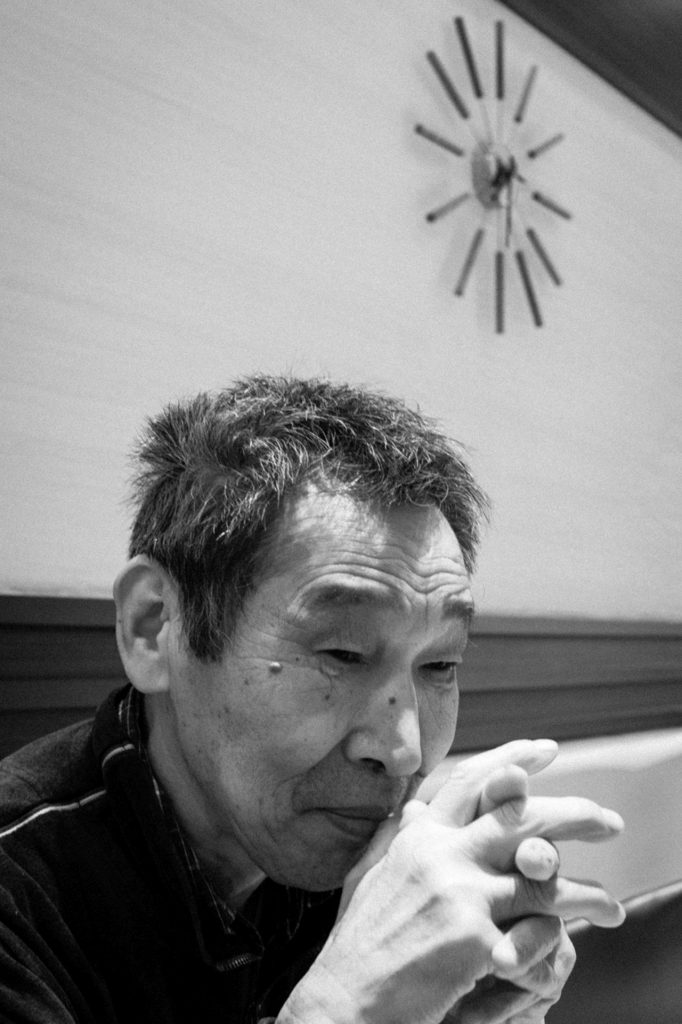 Matsuyoshi san brushing his teeth outside a bicycle parking area 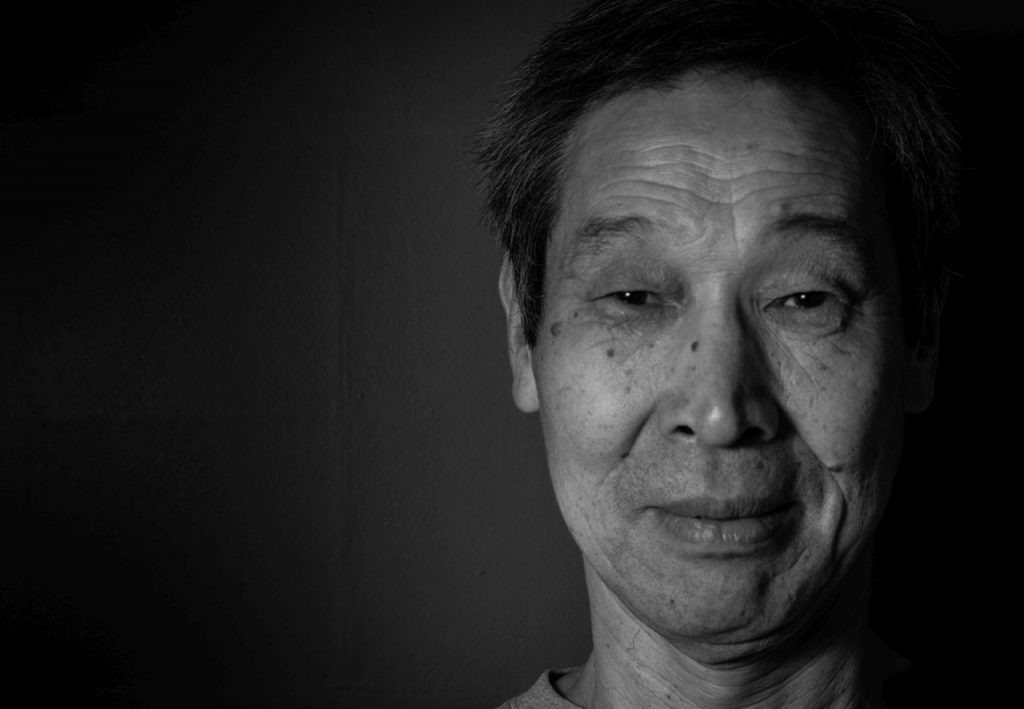 What are your future plans with documenting life on the streets?

I am currently working with Matsuyoshi san’s dance group ‘Sokerissa’ and if I can get some funding, will make a project with them over the summer. That would involve me spending more time on the streets with Matsuyoshi san and other members of the group, plus traveling with them to performances and hopefully trying to get them over to the UK for a few performances. I will be writing about the work I have been doing with them on my blog in the near future.

Where can we find more of your work and projects?

I am also working on a mulitmedia piece for the documentary with Matsuyoshi san, which will be available to see soon on my website.

Thanks Adam for your submission!