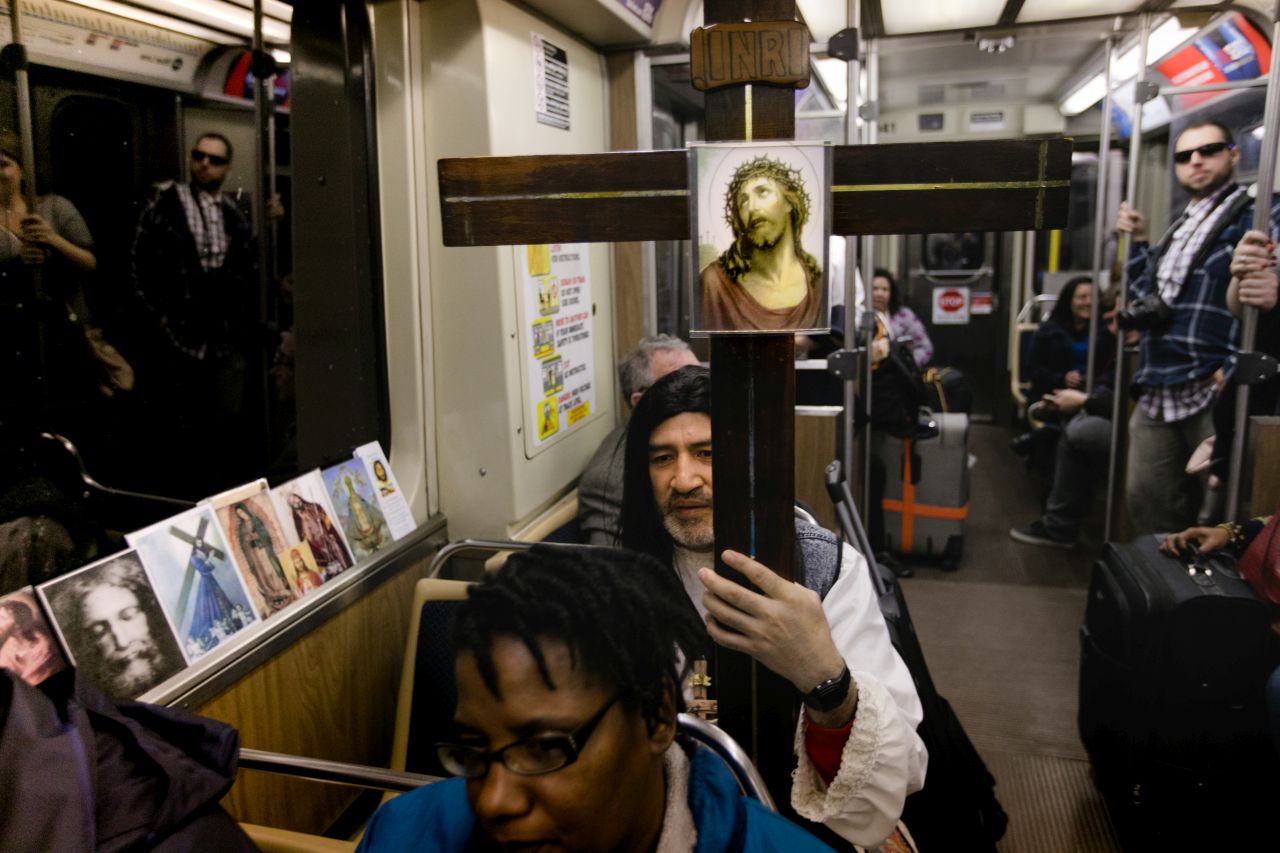 “I love photographing on the streets because I like to capture people who walk around in my day.” Sofie Gheysens dives into the lives of strangers.

I’m Sofie, a Belgium based photographer. I love photographing on the streets because I like to capture people who walk around in my days.  I don’t really have an approach. I travel alone often and I’m open. It just happens. At the moment I’m working on a serie where I photograph intriguing women in an very personal way. 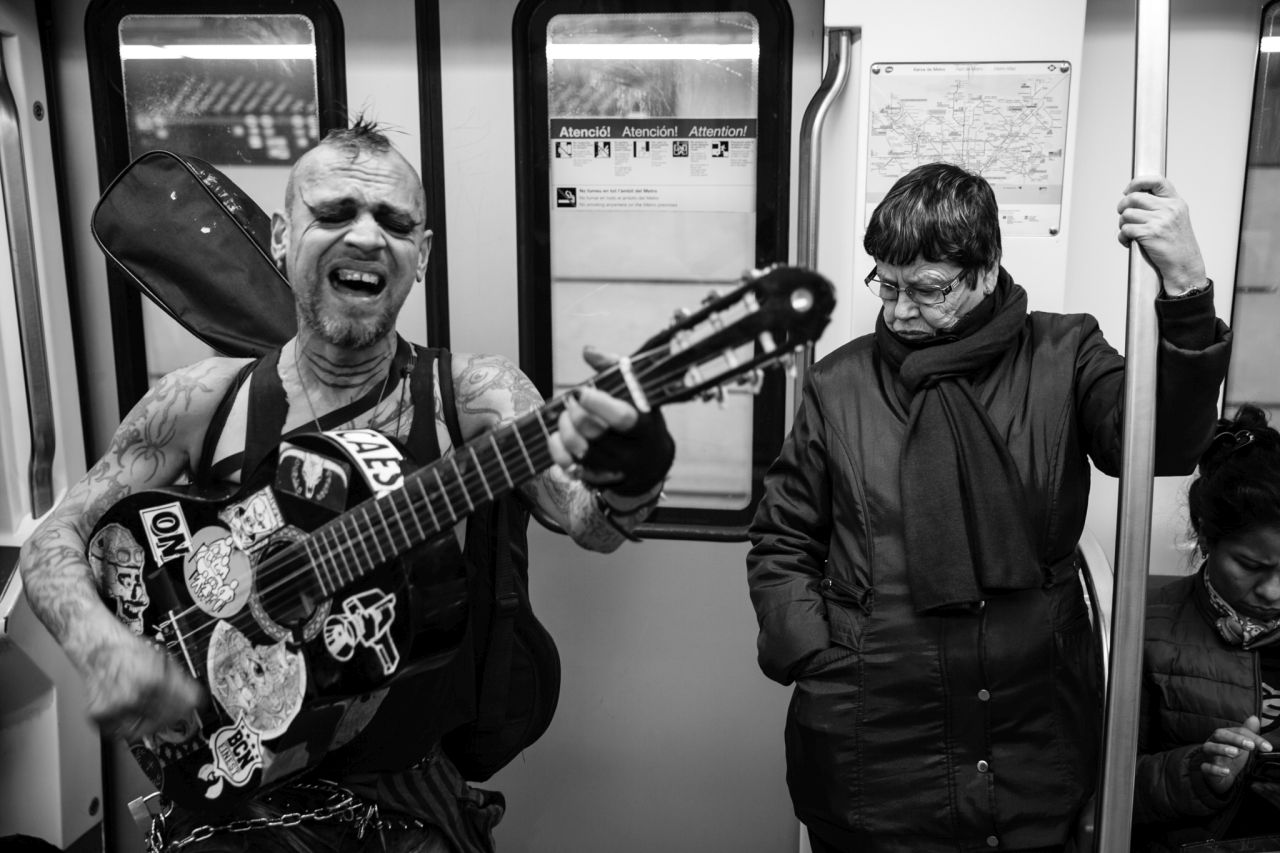 I met Leo in an alley in Barcelona. He was very cheerful and said ‘step into my galaxy’. I spent a day in his life, seeing where he sleeps, meeting his friend and going to his ‘work’. He plays music in the subway. And he is quite talented. At some point I suddenly understood clearly why people who live outside of society drink. It is because looks on people’s faces when they see someone who is different, is really hard after a while. In the picture you can see one of many examples. 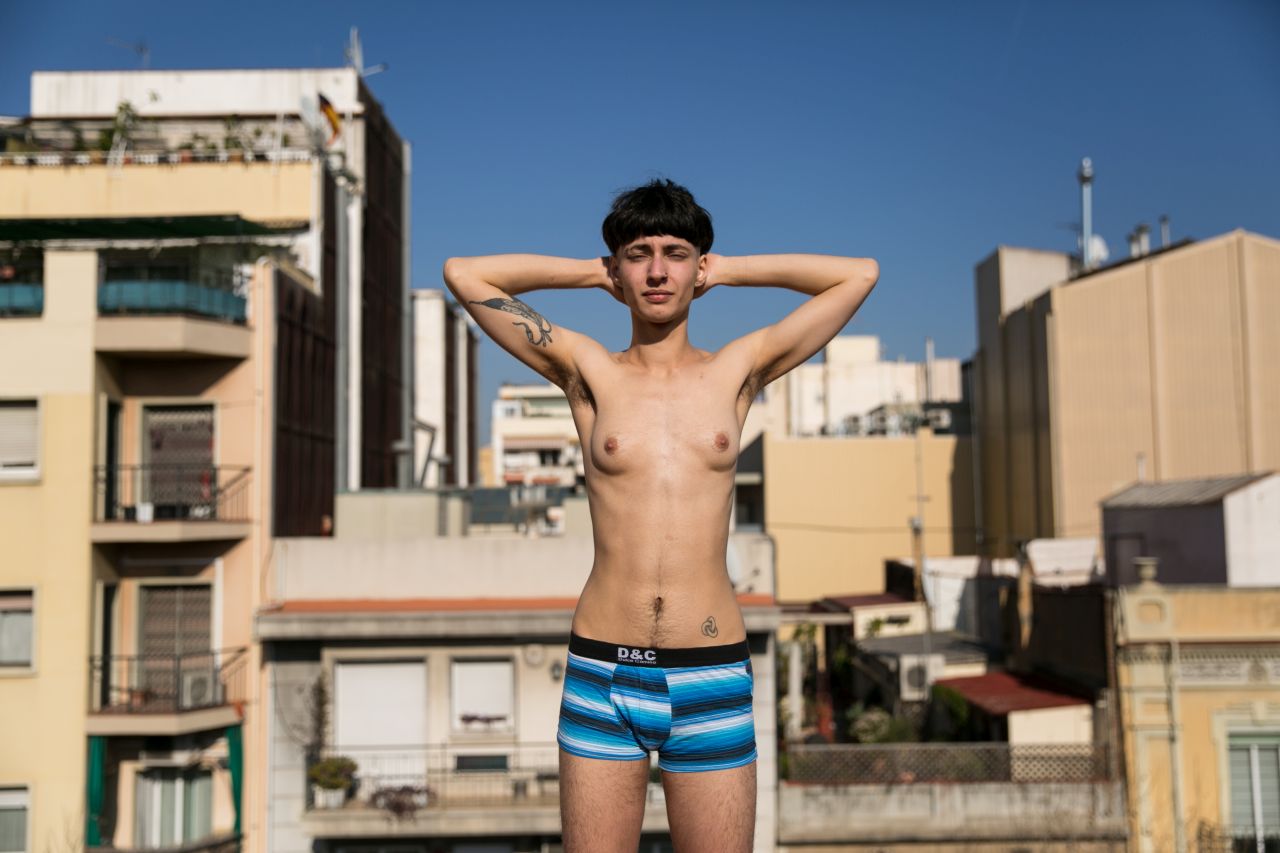 I met Dallas on a square in Barcelona. A year ago he started taking hormones, to transfer to the right sex. He always felt like a man, but looked like a woman. I was surprised because at first you don’t see it at all. ‘Photograph me’ he said, and I did. He felt so at peace with his body now, that I wish everyone could feel as comfortable with him or herself as Dallas. It was blissful to see. 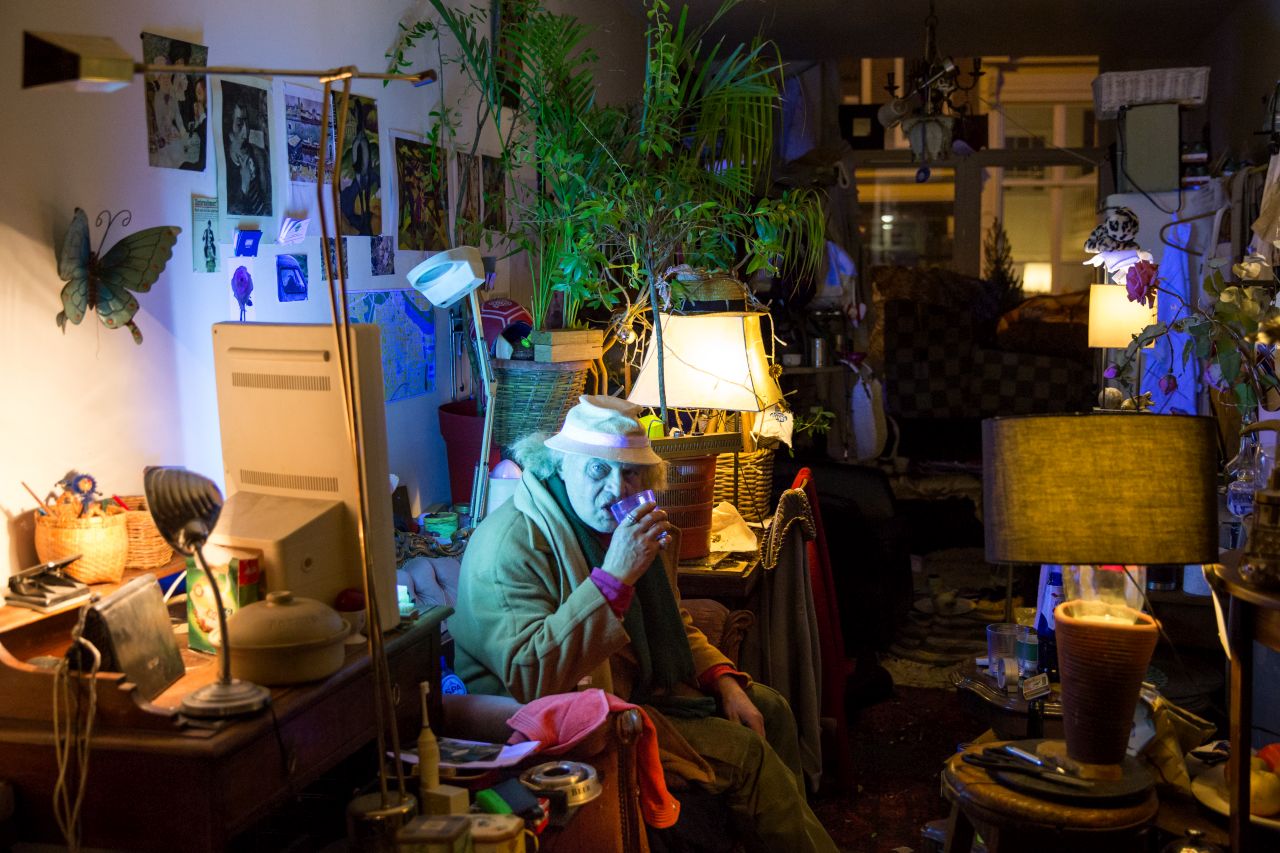 Ruurd was sitting in front of his house in Amsterdam when we met. We talked for two hours on his messy terrace on the street. I soon realized he is a hoarder. He proudly invited me in his house after our two hour talk and told me there is a little free space where we can walk through. I was amazed of how many things he has and how happy it makes him to collect it. After six hours together, I understood Ruurd is one of the most intelligent people I ever spoke with.

Safir was playing music on the streets when we started talking. He is only 23, but he can write a book about all the things that have happened already in his life. He is an example of child who had a loveless youth with no support or tenderness. He was born in Poland, went to Germany, France and now Spain. He is fluent in six languages and is very sensitive. We spent several days together. I took this picture at night of the first day we met. My hostel was fully booked and I wasn’t ready to sleep in the streets yet.

Right before we said good bye I photographed his face one more time. “I’m starting to like you photographing me”, he said “it doesn’t feel as if you are stealing my face”. A while before he told me it hurts sometimes so many people take his photograph on the streets without asking or without donating some money for his music. 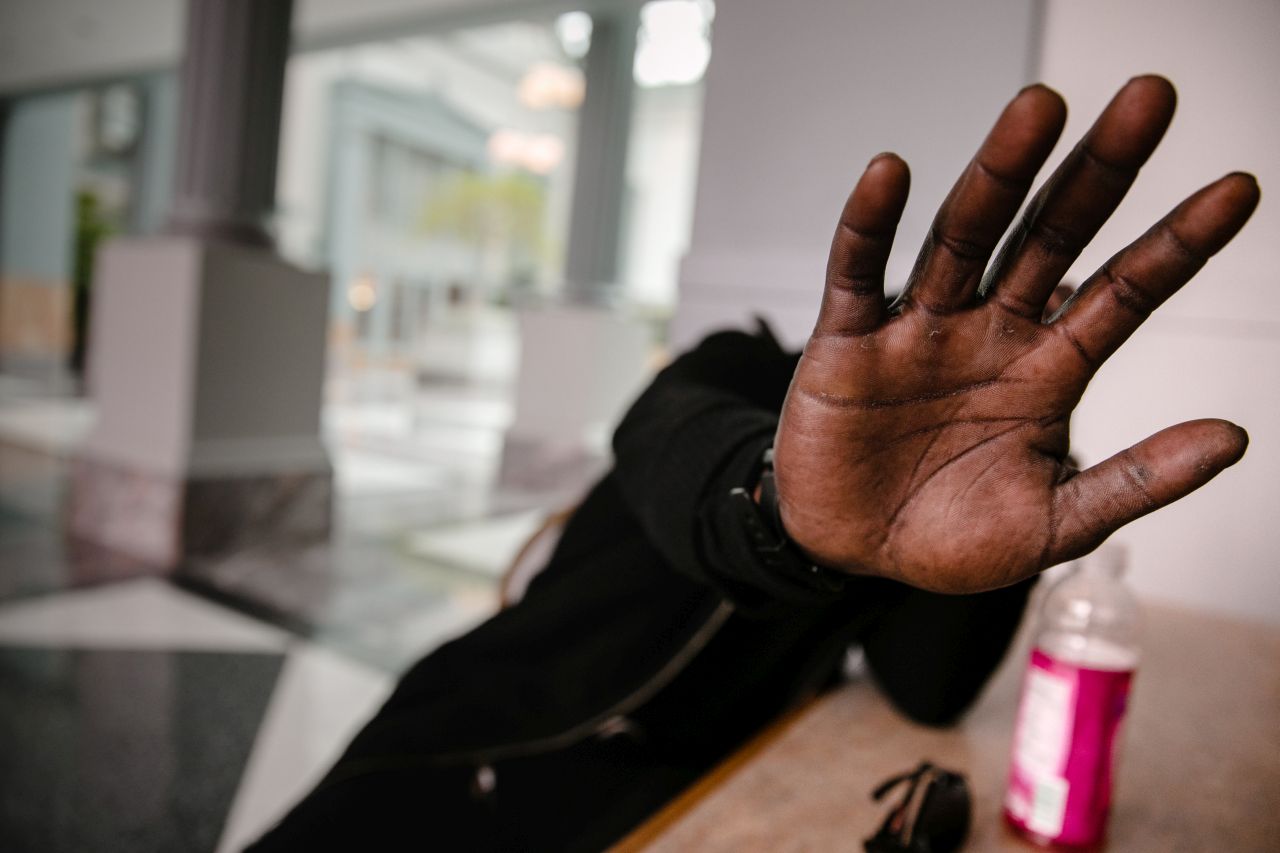 When I was in Chicago at the Greyhound bus station, I met a drug dealer. We started talking and he said he would show me around town. We spent three hours together. He took me to the library. He told me he likes to read and write poems. It blew my mind to hear that from someone who deals drugs. That is where I understood we all have many layers. He told me so many things about his life which is why I couldn’t take a picture where I can recognize his face. So I photographer his hand in the library.

In the subway of Chicago there is a red line, Jackson is the most busy and populated stop. There is always a band playing. This homeless man, named Jack, was there when I was there. He asked me to dance and I must say he was amazing in leading. He was joyful and I felt as if I was at a festival of love. 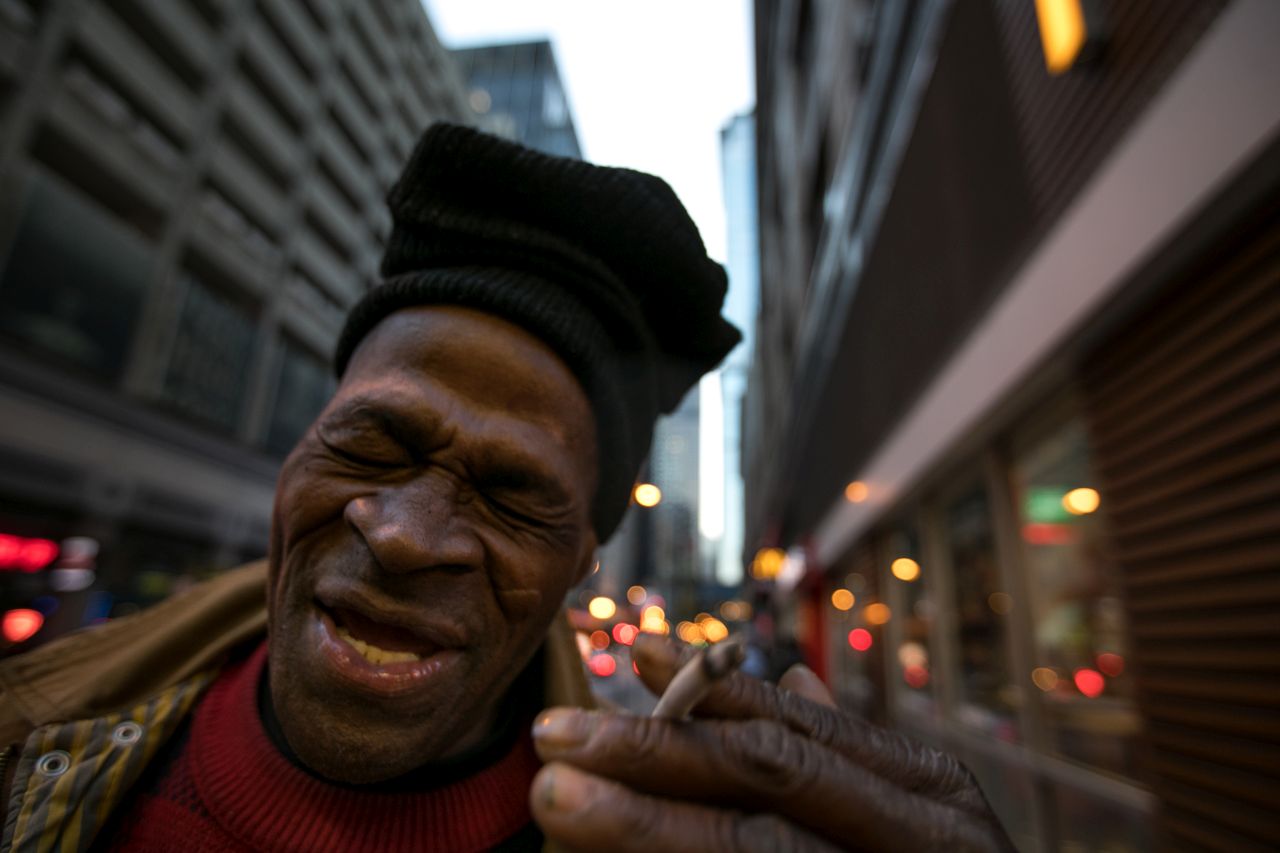 I never asked for his name, we spent 15 minutes together. But a lot happend. This homeless man all of a sudden started singing for me. It was a great performance. When he finished I realized I had no money on me, so I couldn’t give him anything. “It’s okay, but can I get a hug?” “Of course”, I said. We hugged.

Across the street I saw a super market. I asked him if I could get him some food and drinks. We went together. When we got out, I notices he also had two other things under his jacket, which he stole. I understood, even though he didn’t want to admit it. A homeless friend tried to get into our conversation to see if he could get some too. But he sent him away. I think it is hard to make real friends on the street. Sharing, sometimes is losing too much…

In the streets of Chicago I saw this woman wondering. She clearly was homeless, but she wore red lipstick and her hair was nice. She kept her proud, I guess. When I asked her if I could take her picture, she said yes, even though she couldn’t really understand why I would want to photograph her. I don’t think she realized her own beauty. I took 3 pictures. The third picture was this one. A weird one. She is standing behind the glass of a bus stop and I’m on the other side. You can see right through her. I love this picture because it reflects how people look at people who live on the streets. They see them, but they don’t.

On the blue line in Chicago I met Jezus. After our talk he said nobody ever speaks to him because he thinks people are afraid. He told me he originally is from Mexico, but his parents died. He has a grocery shop in Chicago and on his free days he rides the train in the name of Jezus. It makes him feel safe.

This man has a very interesting face. I met him when he was sitting on the streets in Londen. We started talking and ended up staying together for three hours. He told me about his life, about his daughters, his own youth. About his shame, about his future. He lived on the streets for only two months and to get into certain homeless shelters, you have to prove your time on the streets.

When we said good bye I asked him how much money he needs. He said “angel, I don’t want your money, this talk we had was priceless and I am grateful for that. Can I get a hug?” We hugged and said good bye. I gave him 15 pounds to go to a shelter with a bathroom. I realized living on the streets is not only hard because of the lack of money. The lack of conversations and human contact is the hardest part.